You are in: home > what happened > re-balancing >

Chin Rest: Adjustable in all directions

Goal:
To find the violin/viola with just a turn and a nod of the head

To make this possible, the chin rest needs to be fitted in position, height, tilt, angle and shape. Players usually buy one chin rest and are limited to what that one has to offer. The Chin Rest Testing Kit developed for the research made it possible try out different options, and then incorporate the changes made into the design for the final custom made chin rest.

When the chin rest is in the correct position for the player, then the jaw drops into the centre of the cup of the chin rest when the player simply turns and nods the head.

We initially removed the shoulder rest in order to check the chin rest position, asking the player not to use the jaw or shoulder to grab or attempt to hold the instrument. We then positioned the violin so that the strings and bow were at right angles for “bowing straight” with ease. With the violin so aligned with the movements of the player, we then checked to see whether or not the cup of the chin rest was under the jaw. 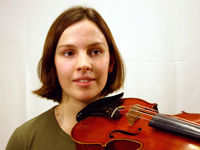 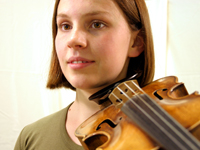 *When the chin also touches the tailpiece of the instrument this can affect intonation, as the pressure of the chin alternately stretches and releases the strings.