You are in: home > what happened > the experience

Changing whats normal
Musicians working together created an environment at the school for learning through experimentation. Things that they admitted they wouldnt have tried alone for fear of being different became normal in the context of the group. Adjusted chin rests, using substitute materials like sponges and balls to experiment with shoulder rest options, practicing while standing on a balance board -- all of these things were new to the individual players but became normal within the group. They accustomed themselves to new equipment, discovered and shared innovative ways of practicing and fresh ways of moving and playing. By the end of the research, students spoke the same language, discussing a new topic that they helped create.

Breaking down barriers
Changes to equipment and struggles with physical and technical problems are generally made in solitude. Ordinarily musicians are not quick to share their difficulties with each other. Only when a problem becomes a personal crisis does the secret come out.

"I had the feeling that the topic was a bit taboo. When you talked about it people would seem uncomfortable. It's like they thought, 'If I talk about my problems, then I won’t be called for the next gig.'  In my case it got so bad that I couldn’t play anymore, so I thought, 'Why should I walk around being secretive about this?'"
-research student

We wished to break the usual pattern of isolation the musician faces when confronted with physical difficulties. By working in a group, students educated themselves about the range of questions and struggles that confront violin and viola players during a normal course of study. Every student found out that they “were not the only one” with physical discomfort, pain, or unanswered questions. Self-confidence increased as students discussed their problems and discovered solutions together.

"The first time that I tried to change my equipment, before this project, I didn’t have a group to support me. When you are working only on your own you feel kind of alone in the world; but in the group you can say: 'I had this or that problem,' and they say: 'I had that too!'  You see each other every week and you can hear what has been going on. You get feedback from the group." - research student

As the project progressed, students had the opportunity to discuss their reactions to the changes in their equipment and playing.

“It helped me a lot to be in group of students that went though the same changes. I could see that other people also ‘went crazy,’ needed time to get used to new equipment. That it was normal to experience that some new material, that seemed to fit during the lesson, was difficult to use when you got home. When you started playing a piece you could not do it immediately with the new chin rest; you first have to get used to the new equipment.”  – research student 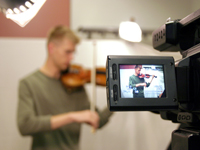 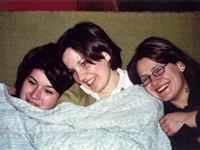 Watching the before and after videos of their playing took several evenings, accompanied by pizza.

Exchanging information about practice tactics increased the level of innovation and the general daring and courage of the group.

“I liked being in a group of musicians working together. Many things I heard in the group lessons helped. For instance, when someone suggested something then you also wanted to try it!” –research student 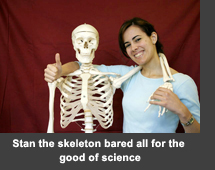 “I noticed that I had a lot of resistance to trying new things. I think in general musicians have quite closed minds… Sometimes, during the research, I thought ‘Come on! Let’s just continue with the normal things.’ But maybe when you don’t believe too much in these ‘normal’ things you sometimes have to trust that it’s okay to try ‘crazy’ things, no?”

There was a purely social aspect of the group that decreased isolation by increasing the fun of the process.

“Without the group I would have worked with a lot less enthusiasm!” 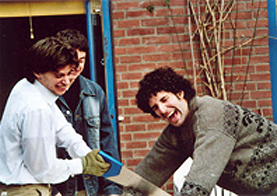 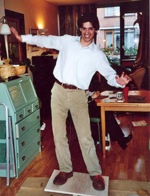 Students building balance boards together to use in their individual practicing.

Because the project was a pilot educational program, both the students and the school began to look at the content as part of a course, rather than a subject to be handled in single cases when the student "couldn't make it otherwise." Musicians working together on their physical difficulties are now "insiders" instead of "outsiders." Instead of fearing that there is "something wrong" with them personally, they are doing what students are supposed to do: improving their playing, while the Conservatory provides the facilities and teaching staff to help them.

"When you are with a group, it becomes a lot easier for the school to accept that this is happening because there are ten other students that are all changing things. It gives an impression of being more official. It is all happening in agreement with the school. Before, when I tried on my own, I didn't feel that the school gave me the time I needed. Because of this I decided to stop the process. Then I got my right shoulder injury. This time, the school was now completely behind this project. It was just time for it now!" - research student

In planning the pilot study, the research team had underestimated the power of the group to provide a platform for innovative thinking, acceptance from your peers, and breaking down barriers to new ideas. Without the chemistry that the group provided, the individual players would not have succeeded.

"Form a group! If you are alone, it is difficult to keep going for a year, trying to sort things out at home alone, and to only come once a week for your Alexander lesson. Even if there are only two people going through equipment changes they should call each other up, get together, have a coffee and talk about it." -research student