You are in: home > what happened > the experience 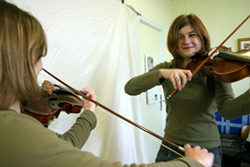 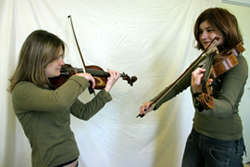 Before the research, musicians had not had the option of altering their chin rests much. They were accustomed to trying to fill up the space between collar bone and jaw by raising the shoulder rest, pushing the instrument up from below. This meant that they had to clamp the instrument exclusively between jaw and shoulder without the support of the collar bone. The instrument was then supported using shoulder rest and chin alone, without the musician having any contact with the body of the instrument. This was the cause of much neck, shoulder and back tension.

With the use of the Chin Rest Testing Kit designed for this project, it became possible for all players to place the instrument on the body. The space between collar bone and jaw was then partly filled in by the chin rest, still allowing plenty of room to move the head, decreasing neck and shoulder tension.

Control
The challenge to the musicians lay in learning to hold the instrument with this new equipment. They were so used to pushing down hard on the chin rest with the jaw, and pushing up with the left shoulder that they were often unaware of it. The pressure they were exerting felt to them as if it was just “part of violin/viola playing.”

Freeing up the left shoulder and arm from the need to clamp the instrument in place and decreasing the pressure of the head on the chin rest was often experienced initially as a “loss of control.” Releasing long-contracted neck and shoulder muscles meant exchanging this clamp for the security of the collar bone under the instrument, combined with the auxiliary supports of the shoulder rest (on the collar bone) and the left hand. The chin rest helped to support the instrument by allowing the chin to give leverage from above.

“Now that I am more aware of myself when I play, I don’t need the “perfect clamp” feeling from my equipment. I just have some equipment to help me have this feeling of balance.” – research student

To help them gather new information to understand how hard they were clamping, it helped to have someone else put a hand gently between jaw and chin rest while they played. If this was uncomfortable, one finger placed along the throat in the space between the chin rest and the player also worked. (The musician could also do this for herself during practicing by using the bow hand to feel under the jaw while still “fingering” the music with the left hand.) In Alexander Technique lessons, this kind of manual feedback was repeated weekly in reference to the whole body, including neck and left shoulder. This gave the musician the sense information necessary to make a choice in how to hold the instrument without excessive clamping.

Expressiveness
Confusion between muscle tension and musical intensity was common. Decreasing the muscles tension required to play was sometimes experienced initially as a loss in expressivity, even when colleagues verified that the expressiveness had not suffered. By listening carefully to his playing the musician could separate the music from the muscle tension needed to produce it, and distinguish the difference between the necessary and unnecessary muscle tension needed to play.

“You really need to take time to make the changes! During the project I thought, ‘If I don’t have the time now to change, when will I have it?  I am here to play better and to improve my musicality.’”  - research student

During the first few weeks after changing the equipment, musicians had to take time to re-discover how to secure the instrument during shifting. This required patience and a calm approach. Over time, however, the enhanced freedom and range of movement added to the pleasure and effectiveness of playing. Equipment adjusted for better fit gave the added grip and support needed for secure performance.

“My advice to others making similar changes is: be calm. Don’t be in a panic. Think further than today, because when you make a change there are days that you feel you cannot play.  You must think: I am going to play, it is coming.” – research student