You are in: home > what happened > re-balancing > balancing games 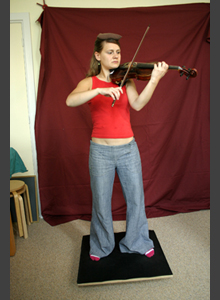 We used some basic equipment to improve balance, mobility and spatial awareness. The students made their own versions of this equipment which they used during practicing throughout the week. They reported that these tools challenged their senses and coordination, bringing a new dimension of control to their playing.

Violinist and violists tend to pull their heads down toward the instrument, shortening neck and spine. This can affect their basic balance and quality of movement. Putting a bean bag on the head was an automatic reminder to the neck muscles to lengthen, and a signal to the brain to pay attention to the head while playing. This also helped them to release the neck when trying out a new chin rest or shoulder rest.

Students often combined the use of two or three of these tools at the same time while playing to refine their balance and awareness further.