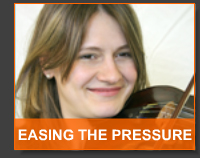 “I could feel clearly that I had been pressing down too much with my head, and that had caused the muscle contractions and stiffness that I had after playing.” - Ian

One thing that surprised us was how the facial expressions of the players while playing changed over time. As pressure on the jaw and face decreased, faces relaxed and symmetry was re-established. 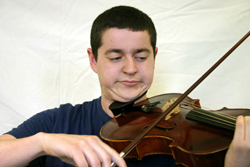 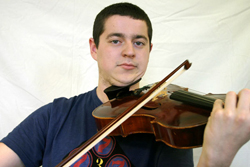 1. Ian pressing down with his head, putting pressure on the jaw and face
2. Ian playing without excessive pressure

The facial bones are sensitive to pressure, as is the jaw. Studies show that the pressure on the jaw and face among even young violinists often leads to degeneration of the jaw joint and teeth, as well as affecting the symmetry of the growth of the facial bones in children. Violinists and violists are more subject to joint and facial pain (TMJ). Having the correct chin rest and shoulder rest diminishes the risks of developing these conditions*

When the chin and shoulder rest require the violinist to exert excessive pressure downward with the head in order to keep the instrument in playing position, the jaw also comes under pressure. When a diagonal push down and to the left is exerted, the jaw joint can be pushed out of its normal alignment. Instead the player should be able to stabilize the instrument simply by turning the head and nodding, allowing him to exert minimal pressure straight down when needed. 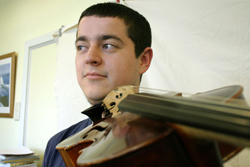 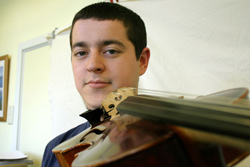 Finding the chin rest easily with just a turn and a nod of the head. 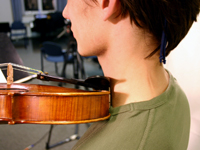 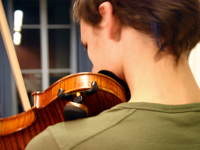 Daniels chin rest was too low; he had to pull his head far down to reach the chin rest. 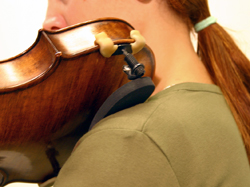 Noelia’s shoulder rest was too high, which raised the violin up off the support of collar bone.

A chin rest that is not the right height, shape, tilt, and position for the player can lead to pressure on the soft throat area, uneven pressure causing misalignment of the jaw, or a twist in the neck. Neck sores can also result. Any of these can cause discomfort and disturb coordination. 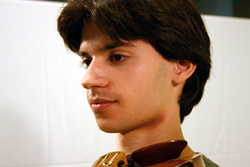 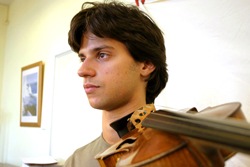 1. Here a neck sore shows that the chin rest shape is too roomy, causing it to press and rub on the throat. Jorge, Nov. 03
2. After the chin rest was adjusted to fit this player, the neck sore disappeared. Jorge, June 05

Many violin and viola players have jaws locked in a permanent contraction because of the constant pressure of the jaw on the chin rest, which can lead to headaches, jaw and neck aches. In addition, a clamped jaw causes pressure in the upper neck vertebrae, immobilizing the neck, arms and hands. To prove this, you need only ask someone to wiggle your fingers or raise your arm for you as you alternately bite and then stop biting.  They will easily notice the connection between your jaw and your hands and arms. (It is easier to observe this on another person than on yourself. Try switching roles and observe your friend’s arms and fingers.)

Often players are unaware of the biting habit. To help our players to observe what they did with their jaw while playing, we asked them to wear “mouth guards” while practicing. These mouth guards, available in most sports stores, are used by hockey players and in other sports to prevent tooth damage. By wearing the mouth guard on their upper teeth while practicing, our players were able to observe the habit of biting as it occurred, instead of noticing tension or pain only after a long session of playing. The mouth guard also provided awareness of the position and movements of the tongue. When they then removed the mouth guard, they found they could still be aware of what they were doing with their teeth, jaw and tongue. They also reported that using the mouth guard helped them to feel how hard they were pressing down with their chins onto the chin rest, since they could also feel the pressure between their teeth. They could then experiment with how much pressure was really needed to stabilize the instrument at different moments.

“I used to bite during playing, especially during performances. After a [playing] exam I wasn’t able to eat anything but soup for a whole day.” - Monica

Some players are attached to their facial expressions, believing that they are part of their musical expression. Sorting out which expressions are responses to the music, and which are habitual reactions to faulty equipment can free the musician to be truly musical, bringing more expression into their playing.

After equipment has been adjusted to fit the shape and position of the jaw and the length of the neck (along with other adjustments), the musician then has the chance to release long-standing pressures and contractions in the neck, head and face. When some of these basic reasons for jaw and neck tension are removed, the musician can work to re-establish balance. Some students reported that their hearing and sight sharpened when pressure on the face and jaw decreased. Considering that most of our sense organs, including our balance mechanisms and our sight and hearing, are located in the head, it makes sense to respect the face and jaw as part of a healthy playing technique.