Bow arm: too far or too close 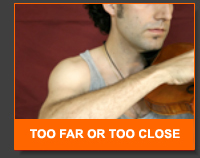 By adjusting the chin and shoulder rest, taking into account the build of each player, we could match the position of the instrument to the players natural bow stroke, causing the bow to go “straight” with less effort.*

I couldnt reach the tip of the bow, which caused an imbalance in my bow stroke and decreased my sound.- Iren

We noticed that all of our shorter or middle-sized players had trouble reaching the tip of the bow using the natural movements of the arm joints. This was because their shoulder rest and/or chin rest dictated a position of the instrument that was too far to the left for the length of their arms.  The result was overstretching of the joints and unnatural movements of the arm, leading to inaccuracy and tension in bowing. 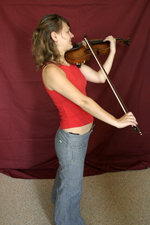 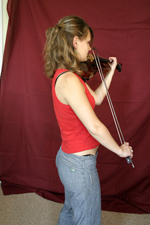 The players often reported that bowing “too far” made them feel that they were too small to play the violin, or that the violin was too big for them. Correcting the equipment repositioned the violin more toward the front, giving easy access to strings and fingerboard. Then the violinists could move more easily, with natural movements of their joints. When the positioning that caused the overstretching of the bow arm was corrected, the instrument felt “smaller” to the player, creating a comfortable match between player and instrument.

This was the most common technical problem in our group that resulted from an incorrect match of chin and shoulder rest to the musician. Most of the players had tension in their bowing technique from a violin position too far to the left.

The tallest players had trouble bowing all the way to the frog. They ran out of room for the shoulder joint to move, causing the upper arm to be pushed into the shoulder socket at the end of every long up bow. They also had to fold the elbow and pull it towards the chest to reach the frog, especially on the higher strings. They reported that this made it seem as if the violin was too small for them. The bow tended to go crooked at the frog, requiring extra work with the fingers to correct it, which made bow changes there awkward. A shaking or bouncing bow on long notes was common. 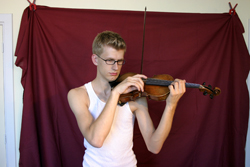 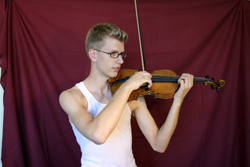 Re-aligning the equipment made it possible to reposition the violin to allow more room in the shoulder joint when bowing at the frog. This led to an unencumbered and freer swing of the bow arm. The bow also tended to be straighter on the string, and the bow changes were less audible. When these changes were combined with a chin rest that matched the length of neck, the shaking bow also went away.
>> Adjusting the violin position