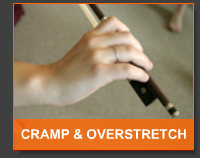 Violin and viola players pay a lot of attention to bow hand technique, using many exercises that focus on the bow hand to develop strength, accuracy and flexibility. But if we look at the violinist as a whole, it becomes clear that stiffened neck, shoulder, and back muscles, all affect the strength, flexibility and accuracy of the bow hand.

An important role of the bow hand is to conduct the musical intentions of arm movements through the bow into the string with the right degree of intensity, accent or softness. Many bowing techniques require the wrist and fingers to move in response to arm movements while acting as shock absorbers, like the brush part of a paint brush.

These sympathetic movements become impossible if tension further up in the arm, shoulders and neck stiffen the wrist and fingers. Then the player’s only choice is to mimic these sympathetic movements by consciously moving the already stiffened bow hand. These stereotyped movements cannot achieve the same goals as the subtle, supple movements of a free wrist and fingers in direct response to the music. Bow changes, legato bowing, spiccato and sautillé are some of the techniques that suffer, causing the musician to “work harder” to improve, only causing more tension and frustration.

Bowing techniques that require more active use of the wrist and fingers to initiate sound (like marcato and staccato) also require that the bow hand not be stiff. Stiffness is the enemy of healthy action, which involves a balance between contraction and release.

The most common interference in the bowing technique comes from the region of the neck and shoulders. If the left shoulder movement is blocked by a shoulder rest pressing on it, then the right shoulder is also affected. For taller players, for whom the chin and shoulder rest are often not the right size, both shoulders are often raised, and the neck is shortened, a constant tension in the arms that affects all bowing, sometimes causing the bow to shake or bounce on long bow strokes. For smaller players, the shoulder rest is often too large in shape and height for their build, leading them to pull the left shoulder down and around the too-large cushion of the shoulder rest, in effect locking the shoulder girdle.

Further tension is created when the instrument is not properly lined up with the natural movements of the joints in the bow arm. The bow hand then has to work harder to make the bow “go straight” on the string, which causes tension in the fingers and wrist. When the violin or viola is lined up perpendicular to the bow (by adjusting the shoulder rest and chin rest to the body of the player), then the right hand no longer needs to actively control the direction of the bow. The bow feels as if it goes straight by itself.*

Huug had trouble with a shaking bow until a higher chin rest and the re-positioning of his violin gave him the room to bow.

Left image: Willemjin tries out her old equipment and instrument position again at the end of the research.
Right image: Tension in the fingers and an overstretched wrist and elbow result from a poor position of the instrument.

When chin and shoulder rest are adjusted to the player’s build and resulting cramped and overstretched playing habits are trained away during weekly Alexander Technique lessons, the general background tension diminishes. Then the bow hand technique can improve spontaneously; the fingers and wrist no longer have to compensate for stiffness elsewhere in the body and are free to move actively, or in response to a movement elsewhere in the arm. We found that bowing technique was the first to improve among our musicians; violin and viola teachers commented on the improvement in sound production in the playing of their students.

*You can read more about some common causes for bow hand tension in these other sections:
neck: the core of coordination
bow arm: too close or too far
left shoulder: the hidden tension