The goal in making The Chin Rest Testing Kit was to give conservatory students the option of adapting their chin rest. Most commercial shoulder rests are adjustable, but most chin rests are not. The kit gave us a range of chin rests to use with people of different heights, neck lengths, and jaw shapes.

By making it possible to adjust the chin rest in height, tilt, angle, shape and position, the musicians could try out different chin rest configurations during a normal day of playing. As they let go of cramped playing habits through re-education, the testing kit allowed for further adjustments. By the end of the first school year, they had clear ideas of what they wanted. At the end of this process the technician could then construct a custom made chin rest that suited each player.

The following pictures show the adjustments available with the testing kit.

Exact size and shape of cup and final adjustments of angle were incorporated by the technician into the final custom chin rests made for each player. 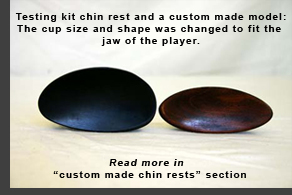 We chose the "Flesch round model" (also called "Flesch neu") as the basis of our kit, and then altered it in height, making a set of five chin rests. To make The Chin Rest Testing Kit effective, we also needed to allow for adjustments in tilt and angle of the cup, both across and along the axis of the violin. This meant that the violinist could tilt the chin rest from right to left (like a sea-saw over the tailpiece), or angle it towards or away from the bridge. During the research, we also found that in some cases we needed to be able to change the position of the chin rest on the violin, allowing the cup to be slightly left of center (towards the g-string), but with the feet still over the tailpiece.

The Chin Rest Testing Kit provided a range of adjustments not available before; it was like having a large collection of different chin rests, some of which we had not seen in stores. With the testing kit we could give new choices to our group of musicians, who had different body types and playing styles. During fitting sessions, a selection from the collection of chin rests, corks and inserts was made that suited the musician at that moment. A shoulder rest or substitute materials were chosen to match it. The player could then try out temporary equipment and adjustments during their normal playing and practicing schedule.

-> Click on the icons above to read more about these adjustments. next