For small or middle-sized players:
A chin rest positioned entirely to the left of the tailpiece angles the fingerboard to the left so that a small or middle-sized violinist must overstretch the bow arm to keep the bow straight while bowing. It also makes it difficult for the violinist or violist to bow to the tip of the bow. This can cause incorrect use of the joints and muscles, leading to strain in hand, arm, neck and back. Hence small and middle-sized musicians with shorter arms need the fingerboard more in front of them, a position achieved by centering the cup of the chin rest over the tailpiece.

For tall players:
In contrast, a chin rest with a cup positioned directly over the middle of the tailpiece places the fingerboard more centrally, which limits the bowing movement at the frog and cramps the shoulder joints of taller musicians who have longer arms. They need the fingerboard angled more to their left side to allow for more room to bow to the frog. This was achieved by positioning the chin rest with its cup  slightly to the left of center, towards the g-string. 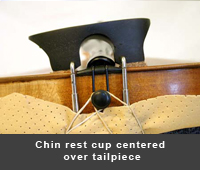 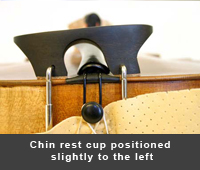 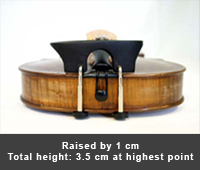 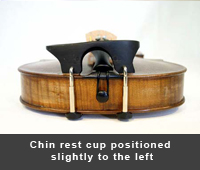