The group of musicians who took part in our study came in all sizes and shapes. With The Chin Rest Testing Kit we were able to fit most students so that they could play comfortably. *

(Neck measured from collar bone to under side of jaw bone near ear, subject facing forward.) 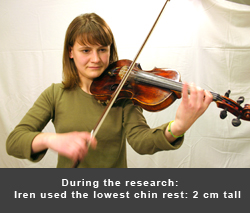 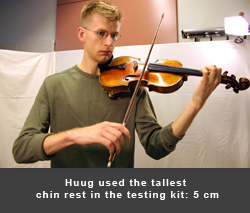 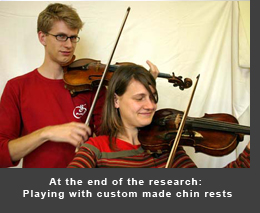 The testing kit allowed the musicians to try out new options for their playing comfort and technical ease. They then gave feedback to the researcher and technician about the adjustments that still needed to be made to create their final custom chin rests. Shoulder rests were also altered or invented at each stage to agree with the new chin rest and position of the instrument. Click here for more on "shoulder rests". In the process of feeling and choosing, the musicians discovered that there was more than one way to hold the instrument, which allowed them more choices in their style of playing.

* There were a few exceptions which we dealt with as we came across them. For instance, for one smaller student we had to lower a standard Flesch round model chin rest by half a centimeter. We could just barely fit it over the tailpiece. One or two students initially kept using their own chinrests of different models, but used the corks to adapt them in height and tilt. (See "musician-stories" section.)