First, The Chin Rest Testing Kit had to be adjustable by height. A commercial model chin rest called "Flesch round model" (sometimes called "Flesch neu") became the lowest chin rest in the testing kit. Four heights above it were added by adjusting the original chin rest upward. The original model has a fairly flat cup shape that fits many people, and the chin rest cup is placed over the tailpiece, a position which we had found from experience helped in the alignment of the violin with the bow and bow arm.

*The model usually called just "Flesch" has a bump in the center of the cup. This is not the one we used.

The five basic heights of the chin rests in The Chin Rest Testing Kit:

To achieve every height that we thought we would need, we designed an extensive collection of corks to allow finer adjustment of the height down to one millimeter. We were surprised how much difference just one millimeter makes in the way a chin rest feels. 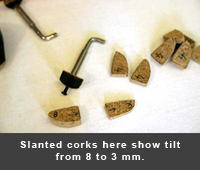 * We noticed that we could raise the original standard
model chin rest up to 10 mm's with corks and still
have it be stable enough for the violinist to play for
a while. Therefore it was not necessary to have
a chin rest raised by 5 cm in the collection, since
we could raise the standard model using corks.

In between heights provided by cork slices: