(to right or left over tailpiece)

The shape of the jaw and chin of the violinist needs to be taken into consideration when adjusting the chin rest. Tilt was important to accommodate differences between players. We also wanted to be able to tilt the chin rest to allow the violin to be angled towards the bow, making the strings more accessible to the bow arm.

We made wedge-shaped corks of different slopes and heights that allowed us to tilt the chin rest to the left or right over the tailpiece (in other words across the axis of the strings). We equipped the chin rests with Wolf independent chin rest screws. These chin rest screws function independently from each other, instead of being connected by a bar as is more common. By raising one foot higher than the other, we could tilt the chin rest and insert slanted cork wedges between the chin rest and the instrument. *    Different degrees of tilt were possible using a pair of corks, from a gentle tilt with a difference right and left of 1 mm, to a more extreme difference of 8 mm. More variations were possible by combining sets of straight and slanted corks. Thirty-four different pairs of straight and slanted corks allowed for almost endless options for height and tilt. 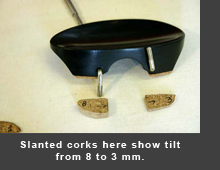 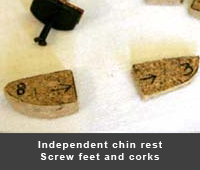 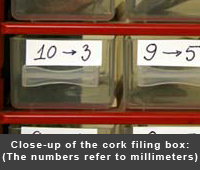 * Slanted corks are stable when the difference between the right and left cork is not more than 8 millimeters. (The difference is measured at the outside edges of the feet of the chin rest.) The player can then use the chin rest normally for a period of a few months. To prevent slide, it helps to first attach the corks to the chin rest with double-sided tape.