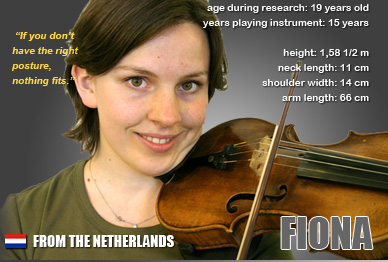 You are in: home > musician-stories > iren

The month that I joined the research project the trouble with the right shoulder had already been going on for 3 or 4 months. I had stopped playing for awhile during the summer to give it a rest. When I started playing again at the beginning of that school year it had gotten worse.

I didnt really know what it was from and I was trying out all different kinds of things to solve the problem. Now I know that there were lots of things that could have caused the pain. 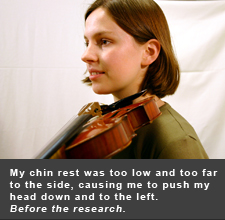 I used to pull my head down to the left a lot, and push my head down so hard that I couldnt move it anymore. This was partly because my chin rest was too low, and the cup was off to the left of the tailpiece, not near my jaw. I couldnt reach the tip of the bow, because the chin rest and shoulder rest forced the violin over too far to the left. I had to push my bow arm forward away from my body to be able to bow straight, which overstretched my shoulder. I also used to push down with my arm to bow. I thought that I was using the weight of my arm, but I was just pushing down, which caused a further strain in my shoulder. 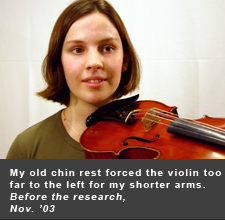 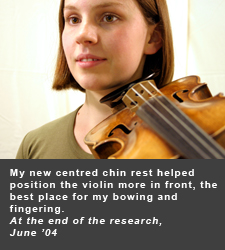 The pain decreased during the project. Several things contributed to this. I learned to use different muscles while I was playing and I was more conscious of my posture, which improved. Also the fact that my chin rest was higher made me realize that I shouldnt push my head down so much. This meant that I wasnt blocking my neck so much anymore. The changes to my shoulder rest also made a big difference. Every now and then I still have a few pains, but on the whole it is getting much better and I am able to play much longer.