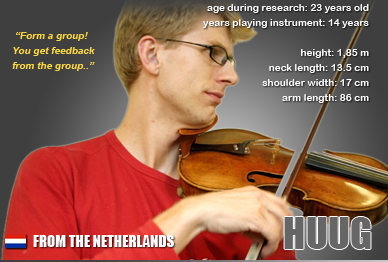 A few years ago I had to stop studying violin because I had a playing injury to my right shoulder. Back then, I had the feeling that the topic was a bit taboo. When you talked about it people would seem uncomfortable. It's like they thought, “If I talk about my problems, then I won’t be called for the next gig.” In my case it got so bad that I couldn’t play anymore, so I thought, “Why should I walk around being secretive about this?”

I had been busy a long time with violin playing and I had decided that this was the work I wanted to do, and then I hit a wall. You have put all of your government study subsidy into it and a lot of years as well, and then… It was terrible. I then thought that I could look for something else to do with my life. So I started working a bit, and took a look at other studies, but nothing struck me really.

Before I got my injury, I had tried to change my chin and shoulder rest and had taken some Alexander lessons. Back then it didn’t work because I didn’t feel I had the time. The school didn’t give me the time to work on it and get used to it.  Because of that I decided then to stop the process of changing my equipment. In principle, my violin playing seemed to be going well, but my body didn’t want to go along with it. Some months later I got my playing injury and stopped my studies. After a recovery period of a year in which I took up supervised sports training, had physiotherapy and Mensendieck therapy, I managed to re-audition and start up my studies again.

Two years later, when I got the note in my box about this new project I decided to try again. And this time my new violin teacher encouraged me to do it