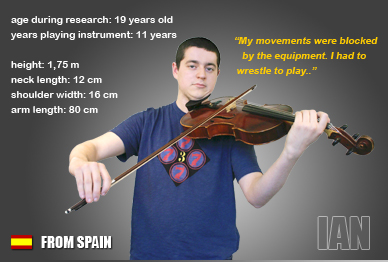 You are in: home > musician-stories > ian

The problems and what we did about them:

We had to find a way to unblock my left shoulder, and stop the wrestling. We started by removing the old shoulder rest, and then raising the chin rest to fit my neck. 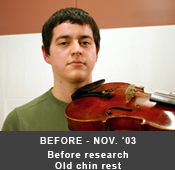 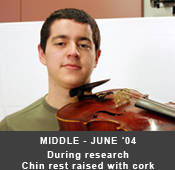 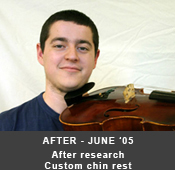 The viola then came to rest on the collarbone, which was very new for me. I could then feel clearly that I had been pressing down too much with my head, and that had caused the muscle contractions and stiffness that I had after playing. The pressure used to deflect onto my shoulder and breast bone through the shoulder rest, so that I was not as aware of it. But when I took off the shoulder rest, I put the viola on my collar bone: I pressed and I cried! Then I knew I had to learn to stop pressing.

People often used to tell me that the way I moved my head all the time to wrestle the instrument into place made them dizzy. When I changed my equipment, and started playing with a higher chin rest, then I was the one who got dizzy! There was suddenly something very stable under my chin. The feeling of being all the time in one place was a little strange, like being a sailor who has been on a rocking boat for years and finally steps onto solid land. My dizziness quickly went away as my body adjusted to the changes.

At first I put the new chin rest in the middle, over the tailpiece. This helped me to learn where my instrument was and how to find my own balance. But with the cup of the chin rest right over the tailpiece I had a new trouble shifting into higher positions. Because I have long arms, I didn't have enough room for my left hand to come around the body of the instrument. So, we moved the cup of the chin rest a very little bit to the left of center and that solved the problem.

I completely changed all my technique during the research. Nothing is like it was before. But now I have freedom to move everywhere. My chin rest now gives me a solid structure for holding my instrument, so I decided not to play with a shoulder rest any more. If I want to move my left hand I can also move my shoulder freely without the shoulder rest blocking it. For example, when I need to play in a higher position and have to let go with my left thumb, I can use my shoulder to bring the viola up for a second, without tension. When I shift down again the viola is no longer on the shoulder and the shoulder relaxes.

The viola is free to move, but now it moves with the normal movements of my body and does not jump around as it used to when I tried to wrestle it from position to position. Before, the separate movements contradicted each other. Now everything in my body feels like it has just ONE STRUCTURE and moves in harmony with itself. 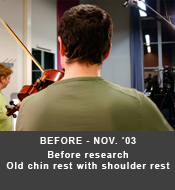 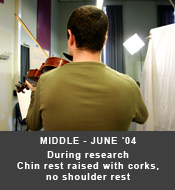 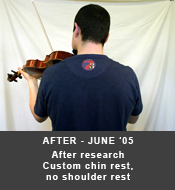