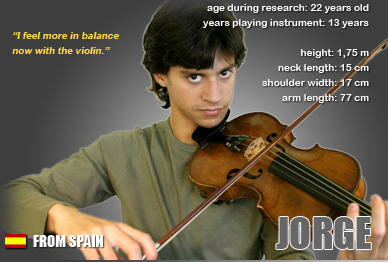 You are in: home > musician-stories > jorge

Changing the equipment
Before the research I had not tried to change my equipment much. I was a bit old fashioned in mindset, afraid of changing something. I had the feeling that if I had something that sort of works, I should just accept it even if I didnt really like it. I had put some very small corks, maybe 1 mm, under my chin rest to raise it slightly, but nothing more. I had also tried changing the position of the shoulder rest. 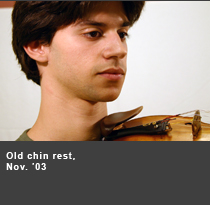 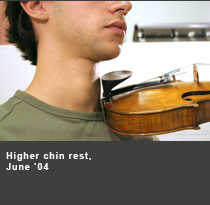 The higher chin rest was new to me.  It didn’t exist in the shops and neither in my mind! 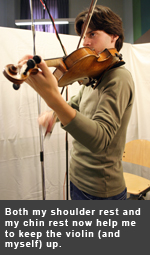 Having the violin on the collarbone I realized that I have a lot of space between my chin and my collar bone. I learned that I didnt have to use a higher shoulder rest for filling up this space, I just needed a higher chin rest. In the beginning of the research, I tried a chin rest that was raised by 2.5 cm and it seemed too much at that point, even though it matched the length of my neck. I can play with it now if I want to, but I like having more space to move; so now I play with a Flesch model chin rest raised 1.5 cm. Still, even if I now used a chin rest that was too low for me I would now know how to keep up the top of my neck so it wouldnt be such a problem.

* Jorge means that he now knows how to nod his head to find the chin rest with his jaw without shortening his neck.

I started by not using any shoulder rest which was okay but thought later that I maybe need a little support. We experimented with the Eprex red balls which didnt work for me. Now I am using my old shoulder rest, Viva la Musica (SAS), but set very low to not interfere with my chin rest. This is the best solution I can find til now.

Getting used to the changes
In the beginning it was a fight between the new equipment and the fact that I didnt know how to use it. How could it work if I didnt know what I wanted from it? It was also difficult to change from a chin rest positioned to the left to a middle one. Everything changed: your bow, the direction the sound came from, etc., which was very weird. These things are now solved more or less but its something that takes time: learning and realizing these feelings.

Halfway through the research I had some concerts as the soloist in the Bruch violin concerto. I was a bit afraid to use my new equipment because I had had an experience at the beginning of the school year of a new shoulder rest falling off during one of the student concerts. For my solo concerts I used the equipment we had been trying out: Viva La Musica shoulder rest and the chin rest raised by 1.5 cm. Even thought I was afraid, it came out okay. It felt very natural.

After the concert I thought of changing the position of my chin rest a bit to give me more room to bow at the frog. But at the tip of the bow I feel very good and for the balance it was nice to have the violin in the middle. At this point, I went back to my old way of thinking from before the research: Now that I have something which is working more or less, why should I change it? I am a bit old fashioned when it comes to making changes.

The chin rest is also not the “holder.” It is just a piece of equipment you have for keeping the right position for playing. It is not the right position itself. That is why there is no perfect equipment!  I would never go back to clamping the instrument in place because this is not what we are all looking for. We all try to clamp when we don’t know this: where our body is.  Now that I am more aware of myself when I play, I don’t need the “perfect clamp” feeling from my equipment. I just have some equipment to help me have this feeling of balance.