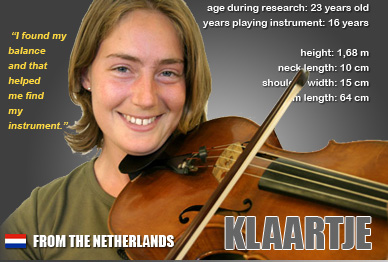 Before joining the research, I always just played with whatever chin rest and shoulder rest I happened to have. I was using the chin rest that came with the new viola and an old shoulder rest.

As soon as I started with my Alexander Technique lessons it became apparent that I was only using the part of my chin rest that was in the middle of my viola. I was sort of clenching my viola between a tilted head and a shoulder which couldnt move because the shoulder rest was pressing right on of it. 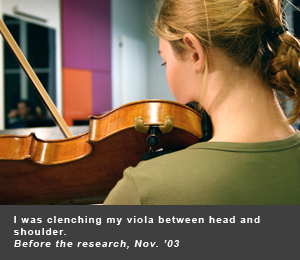 We changed the chin rest to a standard (Flesch) model in the middle of the viola and raised it with pieces of cork, so that it was at the place where my chin was supposed to meet it. After awhile, it seemed a good idea to raise my chin rest further and tilt it a bit to give me easier access to the strings. We also built a chin rest with the cup a bit left of center. 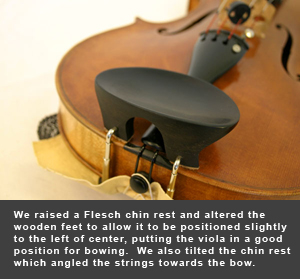 For my shoulder rest, I tried at first to build a frame to hold my viola in place. I took a small Kun shoulder rest, a violin model adjusted to fit my viola. This fitted better on my shoulder. I added a piece of a red Eprex ball to the shoulder rest cushion to fill the space above my chest muscle. I tried to make it so that this new shoulder rest construction didnt block my shoulder joint.

This first frame apparently pushed my shoulder down and away, causing it to over-stretch, thus making life unbearable for my left arm. The Comford Cradle* shoulder rest gave me relief for awhile until I learned how to juggle with my viola such that I could make position changes without a shoulder rest. *see Credits 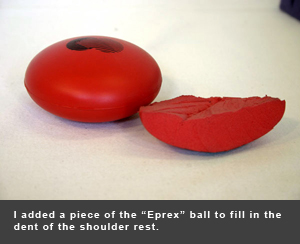 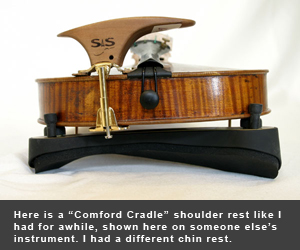 I learned then that the stability of the shoulder rest also took away part of the freedom to play, although it did provide a solid base. It actually turned out I could play a fast movement much, much faster without shoulder rest than with it. With a small purple Loft sponge I found just enough stability to hold my viola, while it gave enough freedom in my left shoulder. I tried not to squeeze with my chin onto my viola, leaving it to rest on my collar bone (for a change). 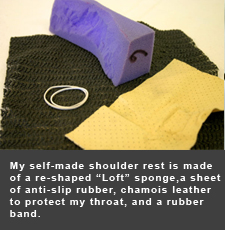 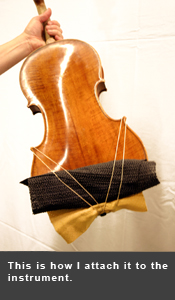 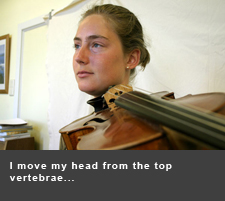 A human frame for the viola

At first, I had a hard time playing a wide vibrato because my viola didnt lie very stable. Stability of the frame and freedom in movement seemed opposed. Finding the equilibrium between stability and freedom relied upon learning how my body works and trying to use one muscle at a time and not have all of them trying to fight each other. Ive learned to use my muscles in an active way. I try to think up from the diaphragm and the spine. In that way I build a human frame on which I can play. 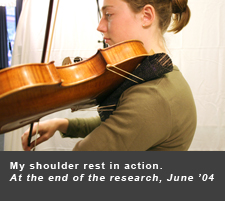 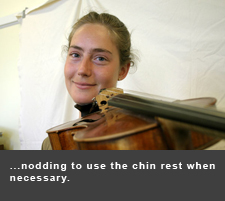 I try to not to hold my head tilted to clamp the viola between it and an over-stretched shoulder. I move my head from the top vertebra, nodding to use the chin rest as a support only when really necessary. And I try to keep my shoulder in place. I can move it forward or backward, but I try not to pull it out of the socket too far, to avoid over-stretching it.

I find that it is possible to move better now, although it still varies from day to day. Because the shoulder rest doesnt push my shoulder, I can move my left arm in many more directions. And because the chin rest is now high enough, I dont have to pull up my shoulder and lower my head to reach it. I now just nod my head to keep the viola in place when I change position.