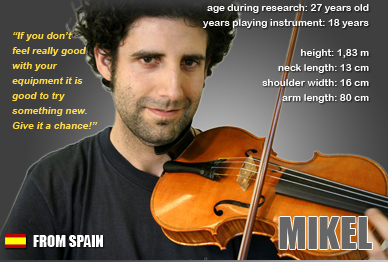 You are in: home > musician-stories > mikel

Equipment changes
Before the research, I had tried shoulder rests of different heights, sometimes adding padding underneath. I had tried a chin rest over the tailpiece and on the side, and even tried raising it using corks. 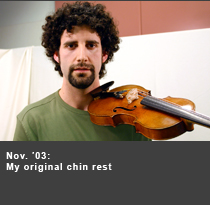 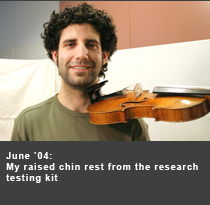 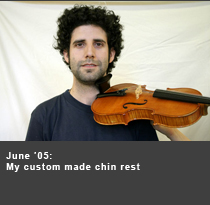 When the research started, I was using a centrally placed chin rest supported by two pieces of cork (about ½ cm high) and a shoulder rest Wolf forte-secondo, with both feet set quite high. With this equipment I didnt have good contact between the violin and my collar bone. Because of this, we decided that I could use a higher chin rest and a lower shoulder rest. We also tried to find a better angle for the violin in order to give more space to my long arms and to my usually contracted shoulders.

First I got a chin rest centered over the tail piece that had been raised 1.5 cm by the carpenter. Later we found that the chin rest adjusted up 2 cm fitted me better. To create a shoulder rest that suited me, we combined parts from two models. To bring my violin onto my collar bone, we used a low shoulder rest without a screw foot (Wolf forte-secondo standard) but altered it so that it could still be higher at the breast bone end. We did this by replacing the lower foot, which had no screw, with one from another model that did. (screw foot from Wolf forte-secondo). 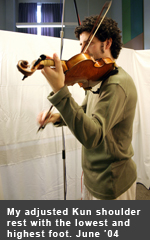 During the first week using my new equipment, I didn’t have time to notice much because I was playing in orchestra. In general I felt a bit better, but the last days of rehearsal I was tense and I finished the orchestra project very tired. Still, it wasn’t any worse than before I changed the equipment!

In the days following the orchestra project, with the new chin rest I felt my neck to be less contracted. My violin tended to fall down a bit, so at Christmas I went home with the idea of improving the contact between my shoulder rest and my body, altering the chin rest by adding small pieces of rubber cut from the Eprex ball.* I added two pieces of rubber to my shoulder rest to make it fit the shape of my chest and collar bone better.With this change, playing was a bit better, but I still wasn’t completely comfortable. My shoulder rest seemed to be a big thing in the way; I didn’t feel much pleasure in taking up the violin to play.
*see Equipment section 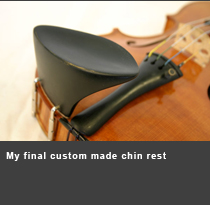 By June of that school year I was using a chin rest raised 2.5 cm. I would have been shocked if I had started by using this higher chin rest at the beginning of the project. I had to learn how to use the equipment over several months. Now that Ive learned to use my head and neck without tensing too much, its okay.

The next step was to position my custom made chin rest to the left of center in order to give me more room to bow by changing the angle of the violin. The chin rest was also higher than the June model and more tilted to suit my jaw shape. Since I couldn’t find a shoulder rest that I really liked, I now play without a shoulder rest most of the time, using a Kun rest sometimes when I feel I need more support. Without the shoulder rest, I feel that the violin is closer to me, which I like.

Without the shoulder rest, I feel that the violin is closer to me, which I like

Playing changes
During the research there weren’t any new playing difficulties, just the same ones I had before!  My goal was to try something new, to play in a new way.  Before, I didn’t see the nature of my difficulties clearly and now I see them.  Some things that I couldn’t do months ago have gotten easy, but there are still some things that I need to work on. I have a general feeling that I can play more relaxed. 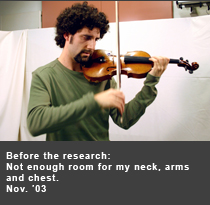 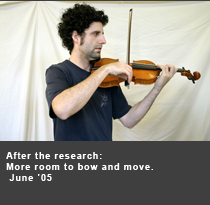 The change of the angle of the violin was disturbing at first, but still not worse than I felt before the changes. My right hand technique changed fro the better because my right shoulder became more relaxed when I got room to bow.

When we first changed the equipment, I didn’t notice too many changes in how I felt, but after awhile I really started to feel better.  There are still many habits from before, but things are changing. I found during the changes that I didn’t like thinking about it too much. I have seen other people in the research, Fiona for instance, doing incredible things by themselves at home alone.  But I just put something together and if it feels more or less okay then I don’t want to think too much about it.  Maybe I should!

Before, I couldn’t play fast with my left hand because I was too tense and very heavy in my body. Now I know how to move light, not heavy, giving me more space for my arms, shoulder and chest.