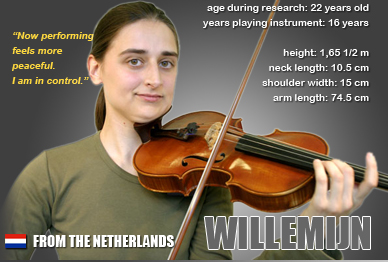 4. What worked for me

Doing vs. Thinking
In the Alexander technique lessons I learned to use my body well: to bring it in balance, not by doing something, but by thinking; to tell my body to think in the right direction. As soon as you start just doing then one creates tension and that doesnt work. But if you think, then you also create muscle tension, enough, for example, to lift something, but then it isnt a taxing tension.

In the past, somebody would say you have to relax and then I would let my arms hang down, heavy. That was also doing something. That was actually more of a burden than that it was relaxing. I found that by first directing my thoughts, and then lifting something, I had a very light arm, ready for action. 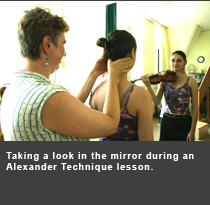 Also I learned to think about my body as a whole and not as separate pieces. Your body can be flexible. You can actually go any direction; for instance, you can lift your shoulder and then lower it again. And of course your neck has to be free.

What changed the most was that I dont move my tongue around any more during playing. We discovered that I would set my body tight when I did this. Now my tongue doesnt move about any more while Im playing. I tried practicing with my tongue sticking out. It can still move then, but you are more aware of what it does. I also used an exercise in which I tried keeping a full view of what was around me during playing. In the past, I was often pre-occupied with myself. Now, instead, I focus on a point in the room or the space around me. When I am in that space around me, Im not only inside myself and I find I dont need to move my tongue around anymore. By relaxing my tongue I was able to relax the rest of my body.